Thinking about giving someone special a chess set after binge watching “The Queen’s Gambit” on Netflix?

Chess has topped a lot of Wish Lists this year and were selling out across the country in 2020! But good news — a complete chess set can be printed on any desktop 3D printer in just a few hours.

“Ever since The Queen’s Gambit launched, our chess sales have increased triple digits,” marvels Elizabeth LoVecchio, vice-president of marketing at Spin Master. The huge toy company has a division of classic games — such as chess, checkers and backgammon — that owns about 70% of the market share in the United States. ~

I’ve found a number of really good chess sets to 3D print on free file sites like Thingiverse and MyMiniFactory.

But if you want to make a truly unique set, you can design your own pieces in Tinkercad or any other 3D design software.

How Many Pieces are in a Complete Chess Set?

There are 32 pieces in a standard chess set, divided into two sets of 16. Traditionally these are made in black and white, but with a 3D printer you can use any color you like.

To make your own set you’ll only need SIX unique designs: King, Queen, Bishop, Rook, Knight and Pawn. The Rook, Bishop and Knight come in pairs and there are eight Pawns to a side.

If you’re not familiar with chess, the Rook is a piece that generally looks like a castle, while the Knight is traditionally depicted by his horse. The King and Queen dominate the other pieces and are often taller. The Bishop can look a lot like a king or queen, but is a bit smaller.

Pawns are the foot soldiers of the game with the smallest pieces.

Traditional sets have simple pieces — after all, the first chess sets were hand carved. You can find modern sets with 32 unique pieces, which sometimes makes it difficult to keep track of who’s who. 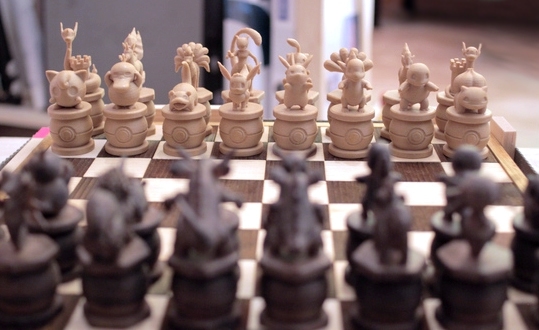 I choose YOU! This Pokemon Chess set has all your kid's favorites: Pikachu, Bulbasaur, Squirtle, Eevee, Mew, Nido, Horsea and more!

The bases are hollow, so they can be filled with weights to add stability.

Check out the remixes on this Thingiverse file -- other users have made improvements to the files so they print better. I'm linking to the original file to give the designer credit. Thanks Raphael Schaaf! 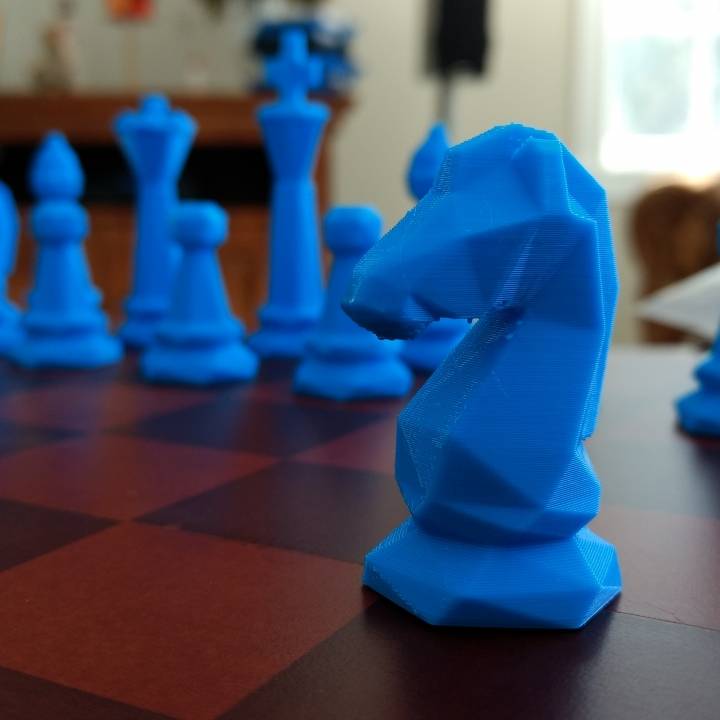 This angular "low poly" chess set is a breeze to print out! Only the king and knight have overhangs requiring supports. 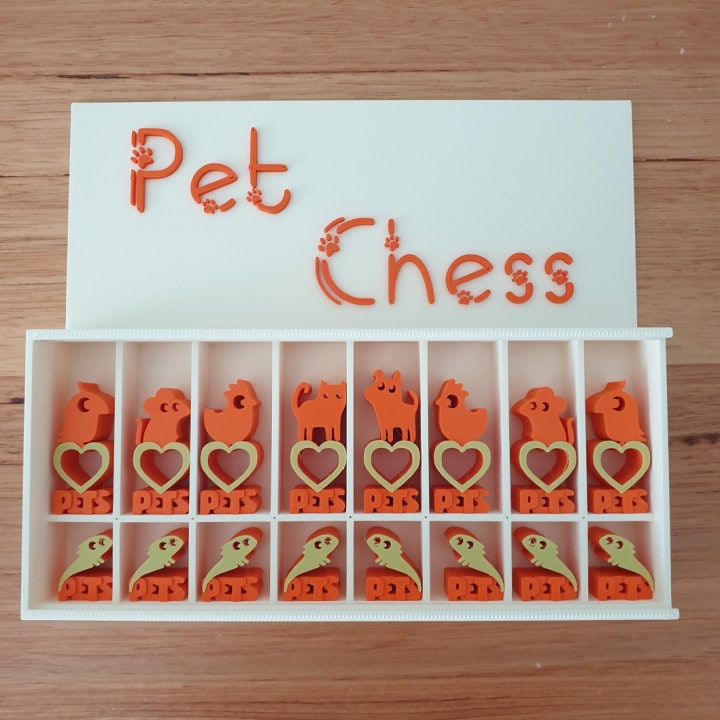 This easy to print chess set has tons of snuggly style! A dog and cat are King and Queen, with loveable chickens, mice parrots and lizards rounding out the set. Print two sets in contrasting colors and you're ready to go!

Display box is included in this free file. 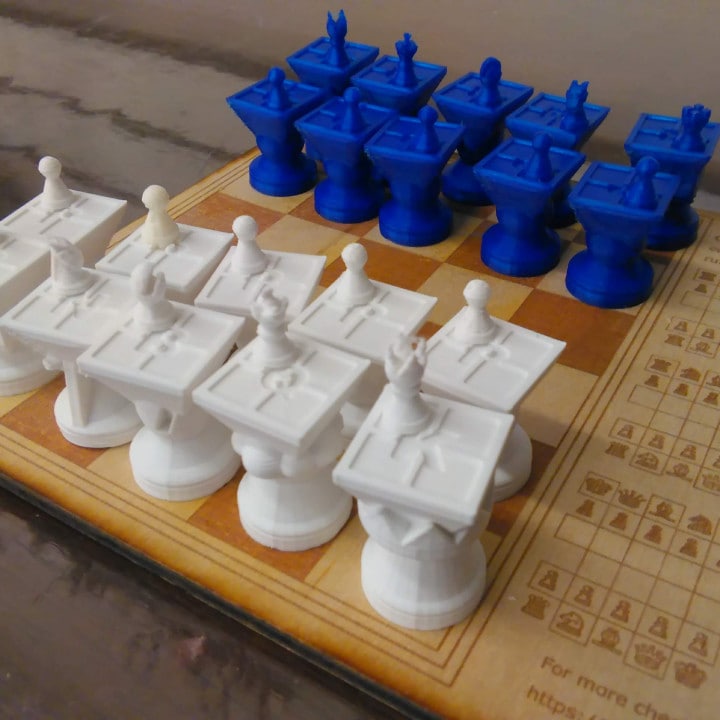 If you're going to 3D print a chess set, why not print a truly mind bending set? This meta set is two games in one, with a tiny chess piece making moves on top of a larger piece. 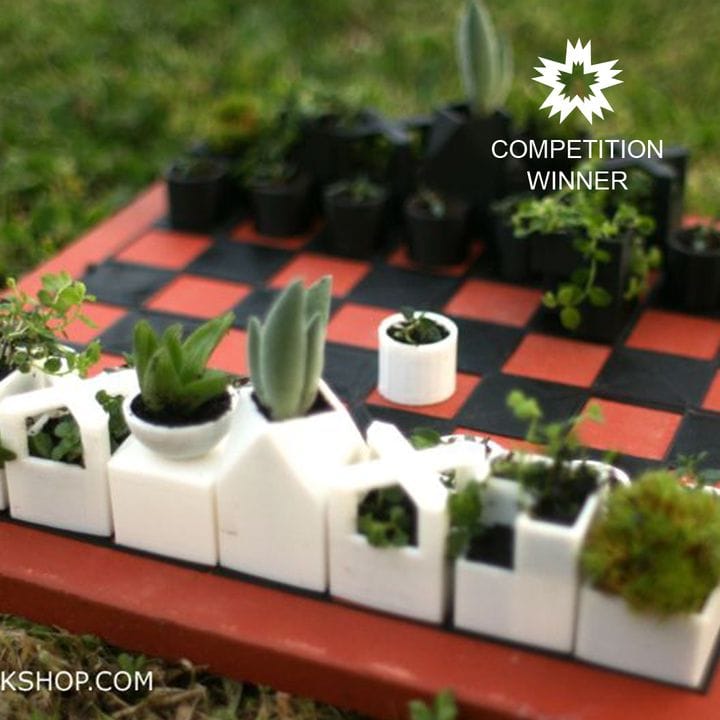 Here's great set for gardener's -- a micro planter set! Fill each piece with a bit of soil and tiny plants. I'm thinking succulents will work pretty great for this piece.

It's probably more of a decorative set, but it's just too cool to not mention

I have no idea how you're going to tell these piece apart, but the notion of a 3D printed chess set of 3D printers is just too meta to pass up.

The pieces are simple models of a CR 10, LulzBot, M3D Micro, MakerBot and a generic SLA printer for the rook. Personally, I think the Rook looks like an Ender 5. Print out an army of tiny filament spools for the Pawns. 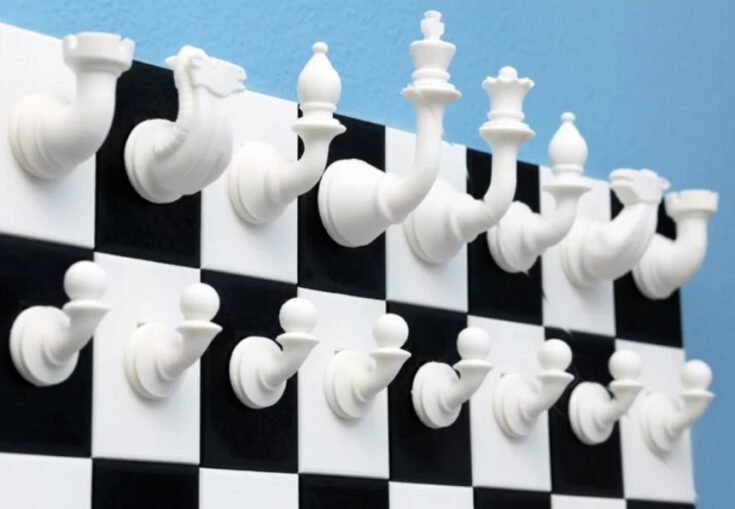 Do you love to play chess, but your cat just wants to play Godzilla with the pieces? Then here's the set for you -- it comes with a wall mounted board. The pieces are bent at 90 degree angles and hook into the squares.

YouTuber Devin Montes of @MakeAnything designed a chess set in Virtual Reality. Don't ask me how -- but if you're curious you can go look up his video. The result is a marvelously artistic and organic looking set. These pieces are surprisingly easy to print without supports...as long as your printer is well tuned and trammed.

Star Wars chess sets are the most searched for, and yet the most difficult to find as a free file. This set uses busts of Star Wars characters, mostly from the first film. (And yes, as a Gen Xer, the first film is Star Wars, a New Hope.)

Other odd choices are Han and Boba Fett as Rooks and Darth Vader as just a Bishop. The pawns are Stormtroopers for the Imperial side and a fleet of R2 units for the Rebels. 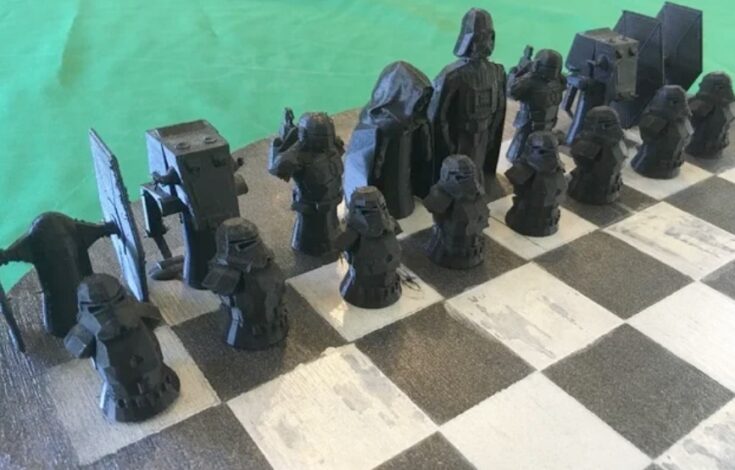 This set was an 8th grade group project. The pieces make a bit more sense, with ships acting as Rooks and Darth Vader as the Queen to the Emperor's King. They lost me a bit on the Rebel side with Leia as King and Luke as Queen...but Leia did out rank her brother. ¯\_(ツ)_/¯

Poor Han gets left out of this set, though Chewbacca does show up as the good guys Bishop.

You will need supports for this set as most pieces are pretty complex. 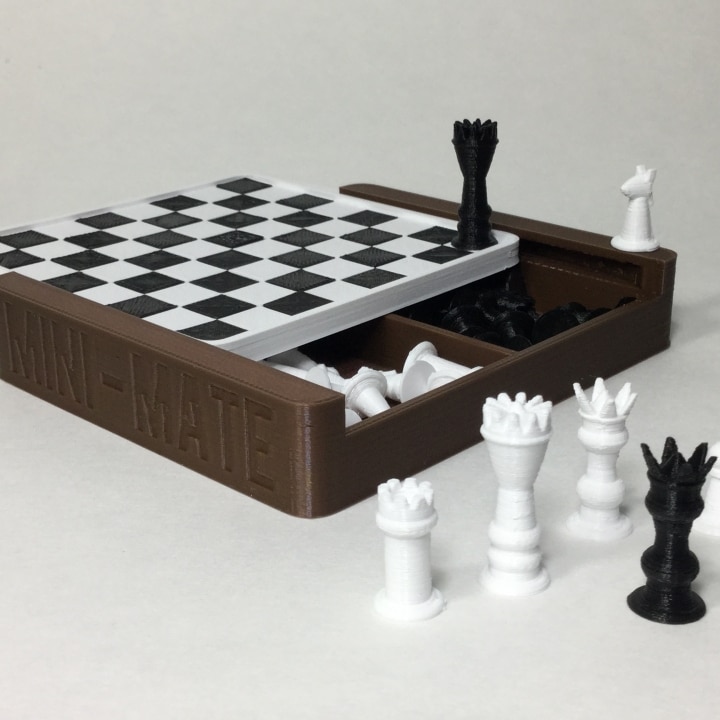 This tiny travel chess set is just 3.75 inches wide! The entire set is 3D printable and doesn't require supports (except for one part of the box). The tiny set is best printed at a fine resolution to capture the detail 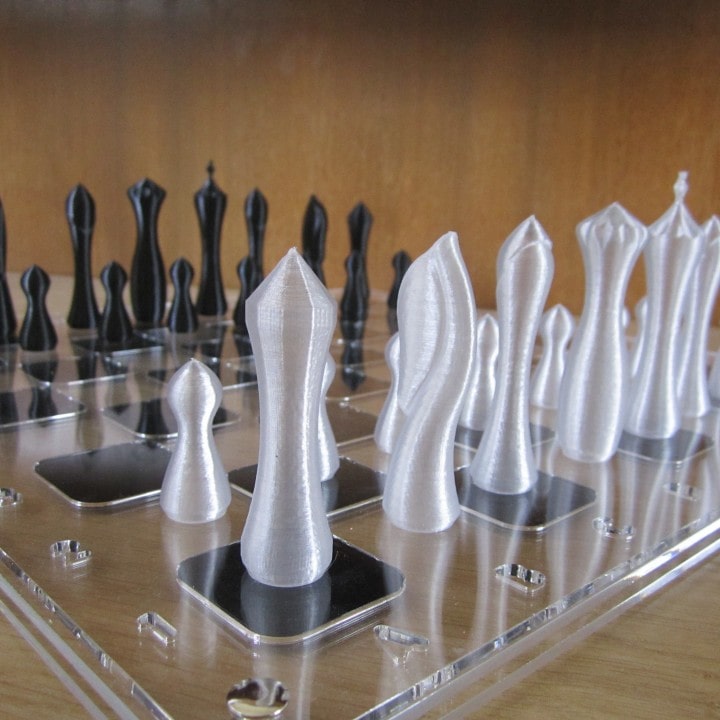 If you're new to 3D printing you may not know about "vase mode." This is a super fast method of printing models with just one wall spiraling upward. The pieces turn out delicate and look glassy when printed on a translucent filament.

This set can be printed in just TWO hours. 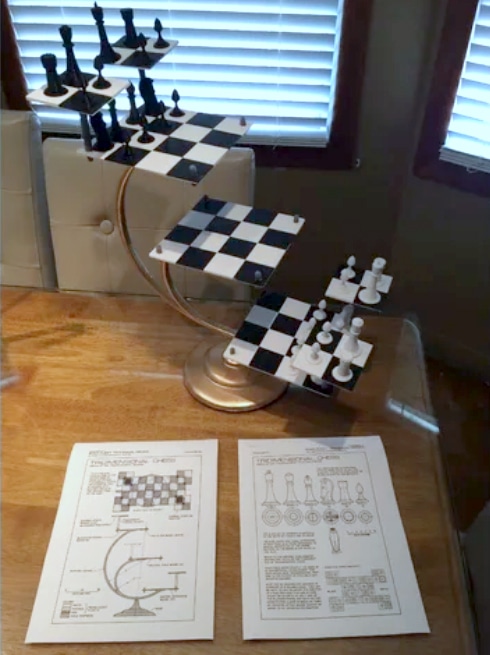 We can't have a post on 3D printed Chess without the original 3D chess set! This free file replicates Spock's favorite chess board and have every part you need to bring it home.

The designer consulted a Star Trek technical manual to get all the details just right.

Set aside some time, this will take a while to print. The designer said it took him two weeks to print and finish!

This blog is still pretty new and I'm working to build up some great content for you! Feel free to check out my other blog: stlMotherhood.com.